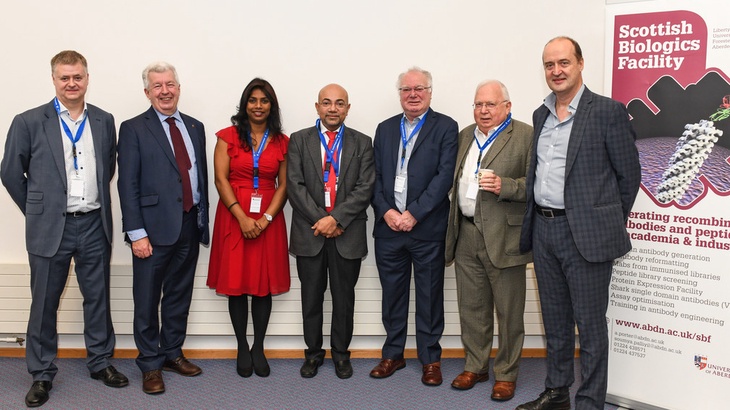 Aberdeen’s Scottish Biologics Facility (SBF) which has helped to spawn diagnostic and therapeutic approaches for diseases such as Alzheimer’s, cancer, arthritis and many more, has celebrated its 10th anniversary with a special event.

The SBF at the University of Aberdeen started with a grant of around £90,000 but this has since grown to become a key cog in developing new therapies which are commercially viable.

So successful has it been, that there are plans to open an equivalent facility in India, staffed by former members of the SBF in the near future.

From humble beginnings, the facility, and the companies which have spun-out from it or partner with it, now make Aberdeen city one of the key centres for Biologics in the UK, outside of Cambridge.

Boasting antibody libraries containing 10 trillion drug leads, the facility is able to use a technology called phage display to find suitable proteins or antibodies to tackle or diagnose conditions.

Biologics differ from other therapies as they consist of large protein molecules instead of small molecule drugs made using chemistry and have natural origins. Now the world’s most important drug class, biologics have important clinical advantages for patients as they are more targeted than small molecules, minimising side-effects and the drug does not need to be taken as frequently – once a month as opposed to three times a day, for example.

Currently, the SBF has a number of important commercial links. One of the most successful is multi-award-winning biotech Elasmogen Ltd which span-out of the SBF in 2016 and has gone on to raise significant equity funding and secure commercial partnerships with global giants such as Amgen Inc and Almac Discovery Ltd.  In addition, the SBF’s most important current partner is TauRx Pharmaceuticals Ltd – a company developing drugs to combat Alzheimer’s, with the SBF acting as part of TauRx’s diagnostic and next-generation therapeutic platform.

The anniversary of the SBF was marked with a one-day symposium featuring speakers who are pioneers in biologics and drug discovery and with links to Scotland and Aberdeen.

After starting off with a modest funding budget we have, over the last 10 years, secured millions of pounds of grants and spun out highly successful biotech companies.”Professor Andy Porter

Among them was John McCafferty, one of the founders of Cambridge Antibody Technology (CAT) and now owned by Astra Zeneca plc, which developed the anti-inflammation drug, HUMIRA, which is currently the world’s biggest selling drug. John is also one of the pioneers of phage display technology and the McCafferty drug library is only available in Aberdeen and Cambridge.

Professor of Medical Biotechnology at the University of Aberdeen and Director of the SBF, Professor Andrew Porter said: “It is a tremendous achievement for the SBF and everyone associated with it, to reach this landmark.

“We were born originally out of the Scottish Funding Council’s pooling exercise to encourage Scottish Universities to work together, and over the years we’ve developed the SBF into a facility with one foot firmly in academia with collaborations across Scotland and throughout the UK and a continued commitment to scientific excellence, and the other foot in the business realm, capable of being a “drug-engine” and the start point of a treatment’s long journey to clinical approval.

“After starting off with a modest funding budget we have, over the last 10 years, secured millions of pounds of grants and spun out highly successful biotech companies. This event will be a fantastic opportunity for current and previous members of the SBF to come back together and reflect on the journey we’ve taken and consider plans for the future.”

Professor Stephen Logan, Chair of the ONE Life Sciences Board: “For the past ten years, the Scottish Biologics Facility has been instrumental in developing North East Scotland into a globally-recognised Life Sciences cluster. The new Bio Hub on the Foresterhill Health campus in Aberdeen will build on this success, establishing the region as a centre of innovation in Life Sciences and I am delighted to be able to share our plans for this exciting infrastructure project at this celebratory event.”

Dr Soumya Palliyil Principal Scientist & Head of the SBF said: “Despite the important role the SBF plays, it’s probably fair to say that it is not a household name in Aberdeen out with the biotech sphere. However, its impact and reach is truly global and is known from San Francisco to South Korea.

“Many people who worked at the SBF previously have gone on to work all over the world and it is through this network of colleagues that we are able to look at expansion into India. India is embracing a lot of Biologics therapies at the moment. They’re making versions of existing drugs, but they don’t have the capacity to make new drugs in the biologics space, so there is an opportunity there. We have specific interests in developing new diagnostics tests and treatments for tackling antimicrobial resistance (AMR) which is a major challenge in India due to the easy access to current antibiotics driving the emergence of resistant strains.”

The one day symposium was held at the University of Aberdeen’s Institute of Medical Sciences on Monday September 9 with a dinner in the evening at Trinity Hall, Aberdeen, and included talks from companies such as the pharmaceutical giant GSK plc and exciting UK biotechs including: Tau Rx, Iontas Ltd, Cambridge UK, TC BioPharm Ltd, Glasgow and Elasmogen Ltd and Novabiotics Ltd both part of Aberdeen’s biologics company cluster. Professor Stephen Logan, Chair of Opportunity North East’s Life Sciences Board will also detail the visionary new Bio Hub – a world-class focal point for Life Science sector ambition and growth in North East Scotland – which is being built at Foresterhill and is due to be completed in 2021. The Bio Hub will support the national ambitions for the sector to collaborate, innovate and commercialise the next generation of therapies and healthcare solutions. The Bio Hub is a key project within the Aberdeen City Region Deal.