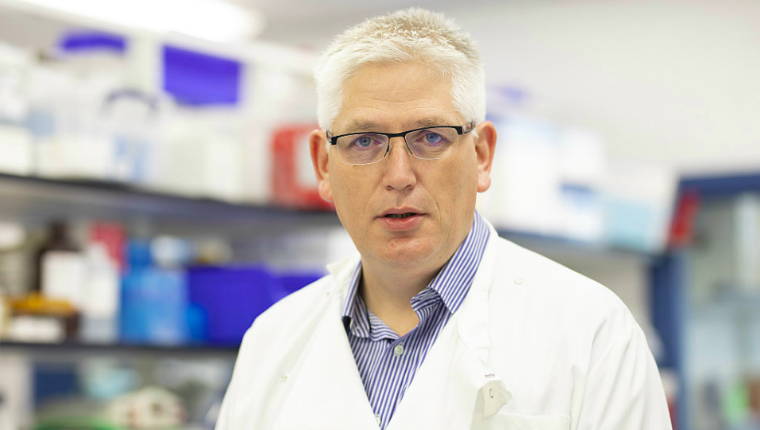 Researchers at the University of Dundee have made a discovery they believe has the potential to put the brakes on the ‘runaway train’ that is Parkinson’s disease.

The team, based at the Medical Research Council Protein Phosphorylation and Ubiquitylation Unit (MRC-PPU) in the School of Life Sciences, have discovered a new enzyme that inhibits the LRRK2 pathway. Mutations of the LRRK2 gene are the most common cause of genetic Parkinson’s.

Enzymes are molecular machines that regulate the biological processes required to maintain healthy functioning life. They can also be targeted by drugs to increase or decrease the level of certain activity –in this instance the LRRK2 pathway.

Much of the knowledge around this pathway originated at Dundee and the team already knew that some enzyme existed that could reverse LRRK2 activity so set out to discover and characterise it. The enzyme they found – called PPM1H – has been shown to possess remarkable properties to reverse the biology triggered by LRRK2.

Professor Dario Alessi, Director of the MRC-PPU, said, “Parkinson’s is like a runaway train – at present we have no way of putting the brakes on to slow it down, let alone stop it. This new enzyme we have found acts as the brakes in the pathway that causes Parkinson’s in humans.

“We have known for many years that the LRRK2 pathway is a major driver behind Parkinson’s but the concept of developing an activator of the PPM1H system to treat the disease is completely new. This finding opens the door for a new chemical approach to the search for Parkinson’s treatments.

“In terms of the current approach, Plan A is to develop a drug to inhibit LRRK2 but even once this is done we don’t know how well such a drug will be tolerated in the body so we are also looking for other ways to switch off this pathway. The purpose of this research was to find an enzyme that naturally stops LRRK2 by mediating these toxic pathways.

“It would appear that the PPM1H enzyme is present in all people and it is not missing in patients with Parkinson’s so if we can find a way of switching this on then it theoretically could benefit all. It also raises another exciting question that we want to study – is PPM1H higher in the brain of certain people and, if so, is this protecting them against Parkinson’s?

Huge progress has been made in the biological understanding of neurodegenerative diseases such as Parkinson’s and Alzheimer’s in recent years but there remains no cure, or even a form of treatment that slows or stops their progression.

While the development of a new drug derived from PPM1H remains some years off, Professor Alessi and his colleagues have already begun working with the University’s Drug Discovery Unit to search for a compound that would switch the enzyme on for the treatment of Parkinson’s.

“Six million people in the world have Parkinson’s disease and many people are getting it in their 30s, 40s and 50s and it affects all aspects of their life,” continued Professor Alessi. “There is nothing that slows the progression of the disease down so we need to be throwing the kitchen sink at this problem.

“By making this discovery, we are now in a position to work with pharmaceutical companies and the Drug Discovery Unit here at Dundee to develop compounds that would switch on this enzyme. This will be challenging work but if we can identify appropriate drug-like molecules then the next stage would be to test them in cells and in animal models to see if they do indeed switch off this pathway.

“If that works it would be certain to stimulate further pre-clinical activity and could potentially lead to a new way to treat Parkinson’s. We have a lot of obstacles to overcome before we get to that point but this is a major discovery for us.”