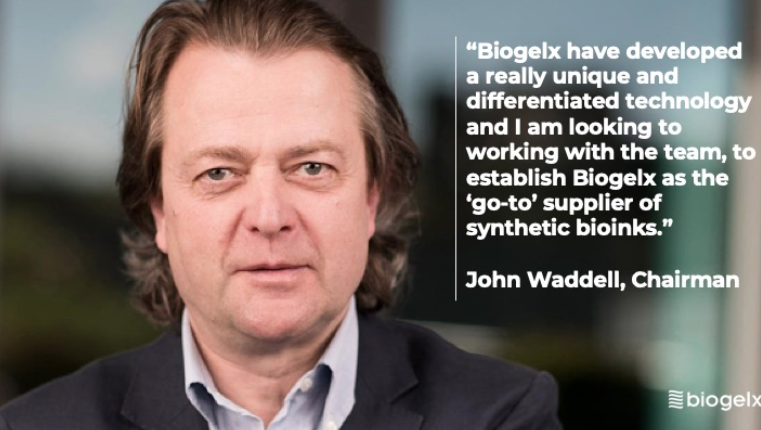 INTERNATIONAL 3D HYDROGEL AND BIOINK MANUFACTURER, BIOGELX, HAS ANNOUNCED THE APPOINTMENT OF A NEW CHAIRMAN.

The company’s Board of Directors have unanimously elected John Waddell to succeed retiring Chairman, Douglas Hutchison who has stepped down from the role after supporting Biogelx since they were established in 2013.

“It’s been an honour to work with the Biogelx team over the past six years and see the company evolve and grow.  3D Cell Culture and 3D Bioprinting are exciting technology areas and John is the ideal person to guide Biogelx through their next phase of development” stated Douglas. “

Biogelx has been developing their synthetic peptide hydrogels since 2013 and is preparing to launch it’s a new range of commercial BiogelxTM-Inks, suitable for a range of bioprinting applications.

John was a solicitor and has extensive experience of driving value and leading early stage high growth companies to successful exit.  In his early career John worked for Christian Salvesen where he led more than sixty global M&A transactions, more recently he was CEO of Archangels from 2005 to 2015 where he grew value in their portfolio and led nine exits. John continues to advise Archangels, sits on the boards of four early-stage companies, Northern 3 Venture Capital Trust, and is also involved in advising an Amadeus fund.

The Board has been impressed with John’s depth of experience and track record of delivering success with multiple early-stage companies, and are confident that as Chairman, John will drive further growth at Biogelx.

John added, “Biogelx have developed a really unique and differentiated technology and I am looking to working with the team, to establish Biogelx as the ‘go-to’ supplier of synthetic bioinks. The company has a clear business strategy to deliver strong growth, and the Board and I are fully committed to supporting this.”