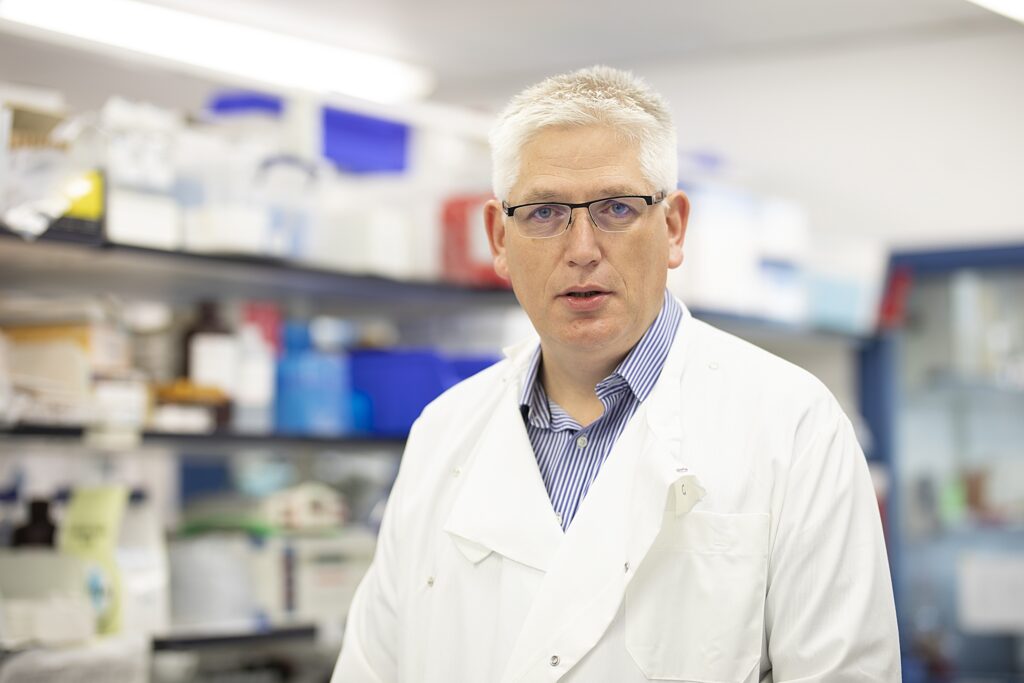 Three of the world’s leading pharmaceutical companies have pledged £7.5 million to allow the University of Dundee’s Division of Signal Transduction Therapy (DSTT) to continue its award-winning work.
Pharmaceutical giants Boehringer Ingelheim, GlaxoSmithKline and Merck KGaA, Darmstadt, Germany, will provide the multi-million pound support for fundamental research in multiple therapeutic areas, including cancer, arthritis, lupus, hypertension and Parkinson’s disease. This new round of funding will support dozens of posts at Dundee for the next four years.
The DSTT comprises 23 research teams at Dundee’s School of Life Sciences, 13 of which are based within the Medical Research Council Protein Phosphorylation and Ubiquitylation Unit (MRC-PPU).
Founded in 1998, expanded in 2003 and renewed in 2008, 2012 and 2018, the DSTT is the world’s longest running collaboration between academic research laboratories and the pharmaceutical industry. The latest renewal means the consortium has attracted more than £65 million in funding since its inception. It is widely regarded as a model for how academia and industry can interact productively for which it was awarded a Queen’s Anniversary Prize for Higher Education in 2006.
DSTT Director Professor Dario Alessi said, “It is incredibly exciting that we have succeeded in renewing our flagship collaboration with our pharmaceutical partners that has been ongoing for the last 22 years. This renewal reflects the high quality and importance of the research that our Dundee-based scientists are making to advance understanding of human diseases such as Parkinson’s, immune disorders and cancer.
“This renewal is a tremendous boost for our research and will secure well-paid jobs at the University of Dundee. It provides our students and postdoctoral researchers with vital experience that will encourage some of them to embark on a lifelong career in drug discovery.”
The DSTT works to help identify new drug targets and then accelerate the early phase development of improved treatments for major global diseases. It helps the participating pharmaceutical companies to develop improved drugs that target major ‘controller’ proteins in the body, focusing on enzymes called kinases and components of the ubiquitin system.
Kinase drug discovery accounts for about 30% of the R&D budget of the pharmaceutical industry. To date, 71 drugs that target protein kinases have been approved for treatment of cancer and immune conditions. The DSTT aims to expand the range of conditions that these drugs treat, with a particular focus on Parkinson’s disease. The School of Life Sciences is the world’s largest centre for the study of kinases and the ubiquitin system, with some 200 scientific and support staff working in this area.
Among the DSTT’s successes was helping to develop dabrafenib, which is used in skin cancer therapy. This drug targets kinases whose functions in the body were identified by scientists at Dundee.
Dr Dirk Stenkamp, SVP of the Discovery Research Site Germany at Boehringer Ingelheim, said, “The foundation for breakthrough medicines is excellence in science. Collaborating with the outstanding scientists in Dundee inspires our teams and catalyses new ideas. Our partnership with the University of Dundee is key to our ambition to bring innovative medicines to patients.”
Andree Blaukat, SVP Healthcare R&D and Head, Translational Innovation Platform Oncology, Merck KGaA, Darmstadt, Germany, added, “Building on a long-standing and successful partnership, we are delighted to enter into a new collaboration phase with this esteemed group of scientists in Dundee.
“Our internal scientific discussions and drug discovery projects across different therapeutic areas are frequently enriched by contributions from experts in Dundee and we look forward to continuing the fruitful exchange and the collaborative work in the future.”